Practical clothing for the most difficult conditions

Major Jasper Rootham, who was to operate in eastern Serbia, had thought carefully about what to wear in the field:

“I had decided that one means of locomotion in Serbia would probably be the horse, and with recollections of sore knees through riding in ordinary trousers at home had purchased some breeches, of a tasteful dove colour. At the same time, realising that ridingboots were useless for marching, I was wearing ordinary boots and puttees. A service-dress jacket, a Sam Browne – fitted with an extra ring from which dangled a compass in a little leather bag – a large revolver and ammunition pouch, the whole thing topped off with a Royal Armoured Corps black beret, made up a somewhat ludicrous picture certainly not prescribed in any regulations for the dress of officers in the British, nor, I should think, in any other army. Underneath, I was wearing two pullovers, a shirt, a money-belt stuffed with sovereigns, dollars, leva and lei, a vest, a pair of pyjamas, a bathing costume, one pair of short pants, one pair of long pants, and three pairs of socks.” 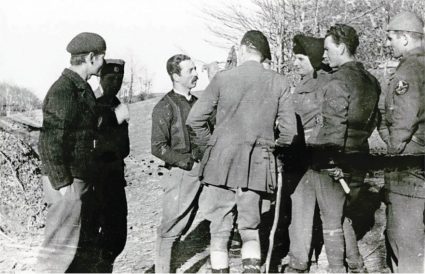